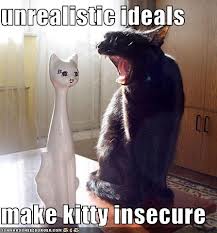 I’ll be the first to admit that I’m sometimes insecure as a writer. But lately, I’ve had some eye-opening conversations with my fellow creatives.

Guess what I kept hearing…

Everyone else seems so calm, cool and collected. I’m always so nervous.

How do people come up with this stuff? They’re so creative.

I thought I was the only one who said dumb things.

Everyone else is so interesting. I’m so boring.

These are all educated, experienced professionals. Top-notch professionals whom I greatly admire. So it was a bit of a shocker to hear them express these insecurities.

One even said she admires how well I take care of myself. A surprising statement made more surprising by the fact that I was eating a bacon breakfast muffin at the time.

It’s one thing to read about the struggles of professional creatives online. There’s a separation that somehow makes them seem almost “more than” normal people like us. Even when occasional flying sandbag hits them, still they stand on a bit of a pedestal.

But hearing these insecurities from people I work with and admire makes me realize something — there are some serious myths about creatives going around.

And it’s time to bust a few of ‘em wide open.

Myth #1
Everyone else knows what they’re doing.

Not nearly as often as you think. Put-together professionalism is what we present to be taken seriously and instill confidence in our abilities. It’s part of our professional packaging.

If you saw what goes on in the background, you might hear circus music playing.

Myth #2
Everyone else has deep, mystical thoughts.

On average, my thoughts run about as deep as a single-stuffed Oreo. Here’s my theory: when we see creative geniuses change the world with thought-provoking innovation, it becomes an impossible standard. Like seeing supermodels when your days of having a 22” waist are long gone.

Most of us are just try to balance paying the bills with doing what we love. We’re not trying to change any world but our own. And get the dishes done.

Myth #3
Everyone else always speaks so intelligently.

Chandler Bing on the TV show Friends once said, “I say more dumb stuff before breakfast than most people say all day.” I can make Chandler sound as brilliant as Albert Einstein. And it wouldn’t even be an isolated incident.

Everyone says dumb stuff. Our dumb stuff just seems worse because we’re self-conscious. Try passing it off as “original thought.” We’re creatives; we can do that.

Myth #4
Everyone else is fearless.

Okay, we all know this total bunk. But we still fall for it because everyone else sounds so sure of everything. Again, it’s part of that professional packaging.

Most of us live terrified, we’re just good at hiding it. Personally, I’ve developed an automatic gameface to mask the WTF that bounces behind my eyeballs whenever I get a new project.

I’m even scared when I publish a new post here. On my own blog. Always. Nervous. I just do it anyway.

Myth #5
Everyone else is so interesting.

We all know one. My group includes a mother of two small children and who juggles a book club, yoga, art classes, professional speaking events and creative retreats that involve picking her own organic fruit at a local farm. Another member of my group (also a dad) interviews local celebrity musicians and home-brews his own beer (legally).

I recently started doing jigsaw puzzles again in between wedding planning shenanigans and will be getting a cat next year.

The truth? Everyone’s interesting. And if you’re a creative professional, chances are pretty good you’re downright quirky. We’re just used to ourselves.

Most of us buy into these myths more often than we think. I’m no different. But if we pay attention and see them for what they are, they’ll start to lose their power.

What about you? What’s the biggest myth you’ve encountered? Share it below and let’s bust it.