It’s that time of year again. Time to take a short break from all the reading and writing and creativity posts I usually do to celebrate what, I think, should be a national holiday. A holiday worthy of taking the day off work to let your inner 5-year-old come out and play. 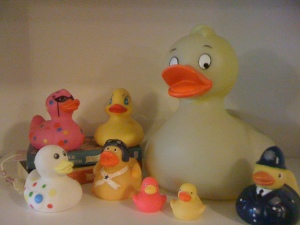 Now, if you’re an uber-serious writer who seeks creative and professional usefulness in every post you cruise, you might be asking, “How will this post help me better my craft?”

But it might give you something to smile about until you find something that suits your productive pallet.

Now, as many of you have probably guessed, I have an above-average fondness for rubber duckies.

So while most of the facts are still true, my flock has grown a bit.

Over the past year, I’ve also learned a bit more about rubber duckies in general.

How to spell rubber ducky

I bat for Camp Rubber Ducky because to me, “duckie” looks like an incomplete spelling of the plural form, rubber duckies. Which my spellchecker hates, but which I use interchangeably with rubber ducks anyway.

What do you think—should I standardize? Should the AP Stylebook weigh in on this?

Oh the great questions of our time.

Where rubber duckies come from

No one knows for sure. What’s generally agreed on is that the first rubber duckies started infiltrating people’s homes and hearts in the late 1800s. These first designs were made of hard rubber and lacked squeakers, but they got cuter as time went on.

Mirror, Mirror on the wall, who has the largest collection of them all?

According to the Guinness Book of World Records (April 2011), that would be Charlotte Lee with a whopping 5,631 unique rubber ducks. Now that’s dedication I think we can all admire.

Incidentally, Charlotte Lee is also the founder and creator of Duckplanet.com, one of my favorite sites for general rubber ducky information and merriment. 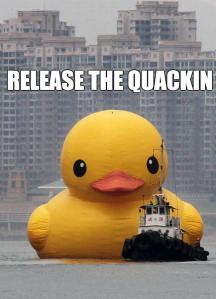 I don’t know who should get credit for this photo or this meme, but I thank them.

Created by Dutch artist Florentijn Hofman in 2007, these rubber ducks are art installations that travel the globe on their “Spreading Joy Around the World” tour.

A dangerous tour, it turns out, as one ducky burst in Taiwan earlier this month. A sad, sad day.

Even though they’re not technically rubber ducks, they’re still cute as a button.

And quite the conversation point, especially when you’re talking to people who’ve never heard of them and who are amazed that an actual grown-up such as yourself is “in the know.”

Organizations and non-profits around the world host rubber ducky races (aka duck derbies and rubber ducky regattas) to raise money for charities. Participants “sponsor” a duck and when all of the sponsored ducks are dumped into the water, people hope that their duck wins.

While I couldn’t find any hard stats on how much has been raised, given that these races have been held for over a decade and can host anywhere from a handful to 250,000 rubber ducks, I’m going to go out on a limb and assume “a lot.”

Often used in software programming, this method of problem solving is also known as “rubberducking” or “rubber ducking.”

The premise being that by explaining the problem to the rubber duck, you’ll either find a solution yourself or at least be able to explain the problem clearly and quickly to someone else if you still need to ask for help. I’m a writer, not a programmer, but it works more often than you’d think.

What’s next for rubber ducks?

Who knows? But they’re popularity hardly shows signs of slowing down. And personally, my flock will only keep growing (probably while I’m not looking; what do they do at night?). So, until next year, here’s wishing you a happy National Rubber Ducky Day!

Confession: Y’all would be surprised at how often I accidentally type “rubby ducker” instead of “rubber ducky” on a regular basis.

Second confession: I never like to mention Earnie’s Rubber Ducky song because it gets stuck in my head and makes me crazy. So in case you ever wonder, yes I’ve heard of it.